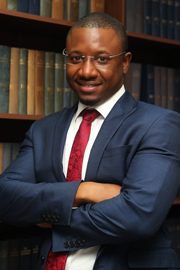 Mr Bensouda was Secretary General of the Gambia Bar Association from 2012 – 2017 and is currently the Chairman of the Board of Effective Intervention.

In 2006 Mr Bensouda obtained an LLB honours degree from the University of Hull, England. He proceeded to a LLM Masters degree in International Economic Law from the University of Warwick, England. He attended Bar School at BPP College of Professional Studies and was admitted to the Bar of England and Wales in July 2008 and thereafter to the Gambian Bar in that same year.

Mr Bensouda became an Associate at Amie Bensouda & Co in 2008 after successfully completing his pupillage.