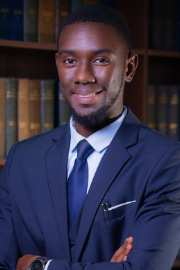 Mr Joof’s professional areas of expertise include Real Estate & Conveyancing, and Corporate law. He assists and advises on the formation of various companies in The Gambia. He advises on corporate restructuring, and serves as Secretary on the Board of several Companies.

Mr Joof is particularly interested in the development of the youth. He has served as the Public Relations Officer of Educating for Africa’s Future (EFAF). He was also a member of Young Advocates for the Rights of the Disabled (YARD).