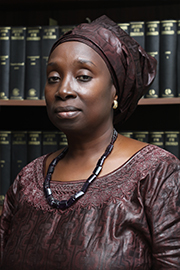 Ms Bensouda founded the firm in 1995. Prior to private practice she worked for the Government of The Gambia for Fourteen years and was Solicitor General of The Gambia for 5 years (1990-1995) and also acted as Minister of Justice and Attorney General. She was respectively Legal Draftsperson; Chief Parliamentary Counsel and Counsel for the privatization of State owned Enterprises & Reform of Parastatals.

As counsel for the Government Divestiture and Public Enterprise Reform Program Ms Bensouda restructured several corporations and para-statals for privatization. She set up joint ventures between Government and both local and international private investors.

Mrs Bensouda is a Member of the London Institute of Chartered Arbitrators (CIArB) and a trained Mediator. She has been involved in numerous high profile litigation matters and has acted as an arbitrator and mediator in commercial disputes.

She sits on the Board of several financial companies and NGOs and has served as president of the Gambia Bar Association for two consecutive terms. Ms Bensouda is particularly interested in land reform and is a member of the TAFLAG – Africa Land Advisory Group.

Ms Bensouda has worked as a consultant to the World Bank, UNDP and the EC.